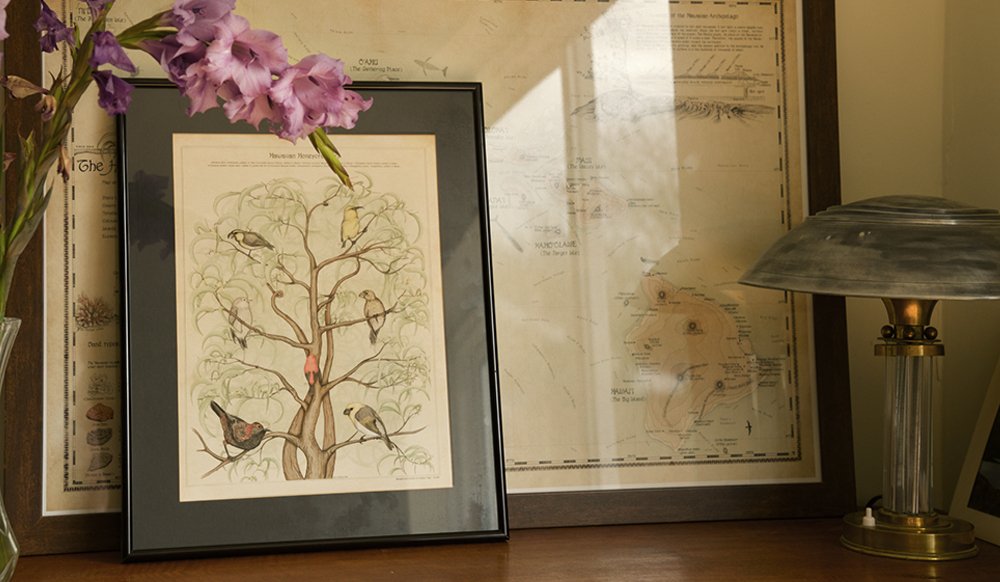 The Map of Hawaii was done but I wasn't done with Hawaii.

The uniqueness of Hawaii's nature inspired more and so I got to work on four pieces of art that could either complement the map of Hawaii, or function as stand-alone pieces.

The Map of Hawaii is delicately balanced: air, water, earth and fire all play a role in its composition. These four elements have now been given a space of their own. Each with an illustration that celebrates the endangered lifeforms they support.

The first to come out of print is Air and it celebrates a special family of small birds, endemic to Hawaii, called the Hawaiian Honeycreepers.

You'll notice that the title of this post is "the improbable gathering", that's because out of the seven Honeycreepers drawn around the Koa tree, some will never meet because these birds are not endemic to the same islands of the Hawaiian Archipelago.

And if you are wondering why you can't spot the famous 'I'iwi bird, well, the 'I'iwi already has a prime location on the Map of Hawaii. The improbable gathering unites some less known Hawaiian honeycreepers: the 'akohekohe, palila, 'akepa, akikiki, 'ainohu kauo,  kiwikiu, and the akiapola'au.