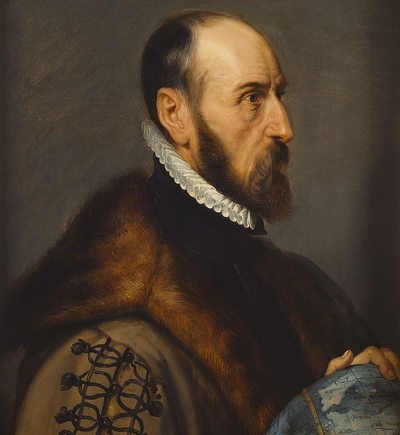 Abraham Ortelius was born in 1527 as Abraham Ortels but later adopted the latin version of his name “Ortelius”. Born in Belgium, Antwerp, he was a prolific cartographer, geographer and cosmographer.

Ortelius started his career as a “Kaartafztter” (a specialist in the illustration and colouring of maps). He set up his business with his sisters, this venture was lucrative and served him well during his lifetime.

It is Gerard Mercator who ignited Abraham Ortelius’ passion for maps. Both men met whilst travelling together and that encounter changed Ortelius’ life, inspiring him to produce his own maps.

The first maps Ortelius makes are large wall maps of: the world, Asia, Spain, the Roman Empire and Egypt. Thereafter, the passion for cartography will dominate his life.

Ortelius is recognised as being the creator of the modern Atlas and the one of the founders of the Flemish Golden age of Cartography he is also the first to suppose the continental drift.

Ortelius is known for adding many sea monsters to his maps, this was simply because maps with monsters sold better than maps without.